VIENNA, March 31, 2022 — By developing a photonic quantum memristor, researchers from the University of Vienna, the National Research Council (CNR) and the Polytechnic University of Milan may have found a way to link the artificial intelligence (AI) and quantum computing. The researchers have designed a device that functions similarly to a memristor, while encoding and transmitting quantum information and acting on quantum states.

Memristive devices are electrical components that change their resistance depending on the memory of the previous electrical current flowing through them. They are used in neuromorphic architectures such as neural networks because their behavior is similar to that of a neuronal synapse.

Abstract representation of a neural network made up of photons and endowed with a memory capacity potentially related to artificial intelligence. Courtesy of Equinox Graphics, University of Vienna.

Artificial intelligence applications are guided by mathematically trained neural networks to mimic human problem solving. The quantum memristor will improve the speed and efficiency with which neural networks compute information, potentially providing the memory capabilities needed for computations at the quantum level.

The photonic circuit produced memristive dynamics on single-photon states through measurement and classical feedback. The single photons were guided on a superposition of several paths. A path measured the flux of photons passing through the device. Through a feedback scheme, this measurement controlled the transmission of coherent quantum information, thus achieving a memristive behavior.

After characterizing the memristive dynamics of the quantum memristor and reconstructing its quantum output state by tomography, the researchers demonstrated a potential application of the quantum memristor in quantum machine learning. They designed a quantum reservoir computer based on memristors and tested it numerically on classical and quantum learning tasks, achieving strong performance with limited physical and computational resources and, importantly, no architectural changes when switching from one type of task to another.

To the researchers’ knowledge, this is the first experimental demonstration of a quantum memristor. The realization of such a device is particularly difficult because the dynamics of a memristor differs from the typical quantum behavior. 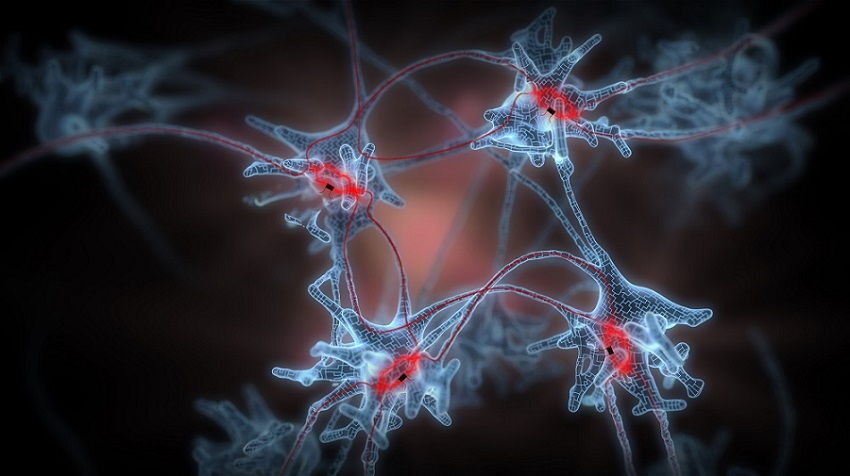 Artistic representation of a neural network containing optically interconnected Mach-Zehnder interferometers. The interferometer is the main component of the quantum memristor. Courtesy of Equinox Graphics, University of Vienna.

The quantum memristor is scalable to larger architectures using integrated quantum photonics. The only limit to greater scalability, the researchers say, is the single-photon rate.

The device could be improved by integrating optical and electronic components in the same chip; the researchers believe this could be done using current semiconductor technology.

The researchers also believe that the frequency at which the quantum memristor operates could be improved by using existing technology. For laser-written circuits, high-frequency operations are readily available at the expense of higher power consumption, and other photonics platforms routinely activate frequencies even in the gigahertz regime. However, to take advantage of higher frequencies, the photon detection rate should be improved. Faster detection rates could be achieved using custom fast detectors and single-photon light sources.

The quantum memristor could provide a missing nonlinear element for quantum optical neural networks, providing a link between artificial intelligence and quantum computing.